The transportation sector is vital to the success of the construction industry. Put simply, if we can’t move people from place to place, whether by air, sea, or land, then simply we don’t have an industry. Almabani is proud to have taken part in several transportation projects within the Kingdom of Saudi Arabia, one of which is the Mega Riyadh Metro Project. Countries around the globe struggle to create better and more equitable access to its most vital destinations and services, all the while reducing the energy consumption and environmental impacts of mobility.
Railway is one of the most frequently used and very cost-effective ways of transportation over long or short distances. In recent decades, rail transportation has appeared to be one of the most reliable and safest modes of commute. Trains are fast and least affected by weather turbulence and better organized than any other medium of transport. It has fixed routes and schedules. Almabani is proud to have recently executed the conjunction rail linking King Abdulaziz International Airport railway station to the Saudi public railway conjunction that rotates between Makkah Al-Mukarramah and Al-Madinah. 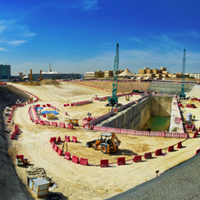 Our Clients Under Transportation